Find Attractions and Things To Do in Finland in 2018


Finland is in Northern Europe and has borders with Russia to the east, Norway to the north, and Sweden to the west. The country is a thoroughly modern highly civilized welfare state with well-planned and comfortable small towns and cities, but still offers vast areas of unspoiled nature. Finland has approximately 188,000 lakes (about 10% of the country) and a similar number of islands. In the northernmost part of the country, the Northern Lights can be seen in the winter and midnight sun in the summer.

Finns also claim the mythical mountain of Korvatunturi as the home of Santa Claus, and a burgeoning tourist industry in Lapland caters to Santa fans. Despite living in one of the most technologically developed countries in the world, the Finns love to head to their summer cottages in the warmer months to enjoy all manner of relaxing pastimes including sauna, swimming, fishing and barbecuing.

Finland has a cold but temperate climate, which is actually comparatively mild for the latitude because of the moderating influence of the North Atlantic Current. Winter, however, is just as dark as everywhere in these latitudes, and temperatures can (very rarely) reach -30°C in the south and even dip below -50°C in the north. The brief Finnish summer is considerably more pleasant, with average temperatures around +20°C, and is generally the best time of year to visit. July is the warmest month with temperatures up to +30°C. Early spring (March-April) is when the snows start to melt and Finns like to head north for skiing and winter sports, while the transition from fall to winter in October-December — wet, rainy, dark and generally miserable — is the worst time to visit.

Due to the extreme latitude, Finland experiences the famous Midnight Sun near the summer solstice, when (if above the Arctic Circle) the sun never sets during the night and even in southern Finland it never really gets dark. The flip side of the coin is the Arctic Night (kaamos) in the winter when the sun never comes up at all in the North. In the South, daylight is limited to a few pitiful hours with the sun just barely climbing over the trees before it heads down again.
Read MoreRead Less 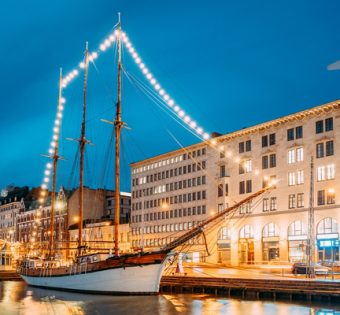 Top Attractions In Helsinki Finland To See And Explore