Exploring the Outskirts of Rome with A Day Trip to Tivoli 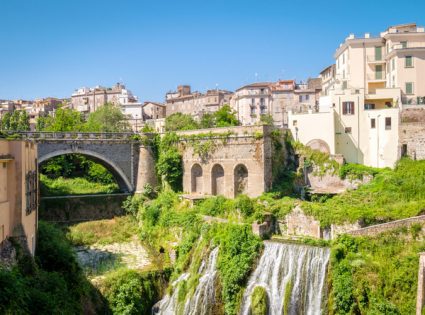 There is absolutely no ground to argue that the city of Rome doesn’t already have enough monuments and sights a tourist can visit.
If you have spent time in Rome, you already know that.
But if you have some extra time on your hands, my recommendation is to plan a day trip to Tivoli, a small town located about 30km northeast of Rome.
Despite its rather small population of less than 55, 000 it has a lot to show for.
For example, among the main attractions, you will find 2 UNESCO World Heritage sites.
Furthermore, it is a nice break from the city, because Tivoli is surrounded by a rich green landscape.

One of the UNESCO sites is the Villa Adriana. Today there is not much left but ruins of the original villa and the complex of more than 30 buildings, but it remains a gigantic archaeological complex that attracts many visitors. Among the buildings were palaces, temples, thermal baths, theatre, libraries, etc. Interesting as well is also that underneath the area you can find a network of underground tunnels.

The second UNESCO site is the Villa d’Este. It has been recognized for its Renaissance architecture and for its gardens that bare superb water fountains. Among the most acknowledged fountains are Fontana del Bicchierone, Rometta (which reconstructs a little model of Rome), Fontana dell’Ovato, and the Fontana di Nettuno. Along one of the walls, you will also come across Le Cento Fontane, a wall with 100 fountains.

Another worthy sight in the area of Tivoli is Villa Gregoriana. Unlike the name suggests this is a park near the hills of the ancient acropolis. Until 2005 it wasn’t open to the public, but thanks to a big project the landscape has been recovered. The Great Waterfall that ends in the river Aniene and the surrounding woodlands deliver a beautifully picturesque landscape. The winding paths will take you to terraces, caves, and tunnels.

There are buses and trains that go from Rome to Tivoli and there are a couple of more things to explore in this area. After a long but exciting day-trip, you will be happy to get some rest returning to your Rome apartments.