The Best Routes to Take to Explore Mt Kilimanjaro 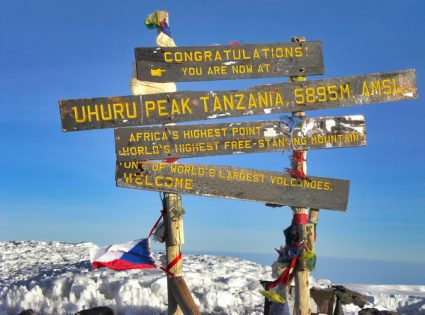 Back in 2015, I climbed Mt Kilimanjaro. My team decided on climbing up the Machame Route (also affectionately known as the Whiskey Route). At the time, it offered the best compromise between traffic, scenery, weather, and availability.
But preferences are personal. Would you prefer to sleep in tents or huts? What about traffic, would you prefer to bump into many other trekkers? And wildlife, how important is it to you? We go into this detail and more for each route and learn which route is best to take to explore Mt Kilimanjaro.

We’ve combined our own experiences with the opinions of our guides and other professionals to come up with the following appraisals and rating system for Mt Kilimanjaro routes. If you have different experiences, we’d love to hear about them in the comments.

There are six approved routes on Mt Kilimanjaro. When choosing one, consider the level of adventure, time for acclimatization, physical difficulty, diversity of scenery and wildlife, and human traffic. The extra day that is recommended for all routes gives you a higher chance of summiting the mountain, as a slower ascent helps your body to acclimate.

Also known as the “Coca-Cola” route, the Marangu route is the oldest, most established route, with about 80-90% of the mountain’s traffic. Many favor the Marangu route because it’s considered the easiest path on the mountain, given its gradual slope. It is also the only route which offers sleeping huts (for this reason alone we advise against it – all reports suggest camping is more comfortable and rewarding).

You need a minimum of 5 days for this route. However, spending an extra acclimatization day on the mountain is highly recommended. The route has the least scenic variety of all the routes because the ascent and descent are done on the same path.

Also known as the “Whiskey” route, the days on Machame are longer and the walks are steeper. The Machame route is considered a relatively difficult route and is better suited to more adventurous folk and those with some hiking or backpacking experience.

You need a minimum of 6 days for this route, although seven days is recommended. The Machame route is scenically beautiful and varied as it passes through a variety of landscapes.

The Lemosho route begins in the west and crosses Shira Plateau from Shira Ridge. Climbers encounter less traffic (but it’s increasing) until the route joins the Machame route. Afterward, Lemosho follows the same route through Lava Tower, Barranco, and Barafu, known as the southern circuit.

You need a minimum of 6 days for this route, although 8 days is ideal. Lemosho is considered the most beautiful route on Kilimanjaro and grants panoramic views on various sides of the mountain.

The Shira route is another path that approaches Kilimanjaro from the west, and nearly identical to the Lemosho route. While Lemosho starts at Londorossi Gate and treks through the rainforest to Shira 1 Camp, the Shira route bypasses this walk by using a vehicle to transport climbers to Shira Gate.

Although Shira is varied and beautiful, Lemosho is recommended over Shira due to the high altitude of Shira’s starting point, which is achieved quickly by car. It is possible that climbers will experience altitude related symptoms on the first day due to failed acclimatization. Climbers using Shira should be confident of their ability to acclimatize quickly.

The Rongai route is the only route that approaches Kilimanjaro from the north, close to the Kenyan border. Though gaining popularity amongst climbers, Rongai has low traffic. It is the preferred route for those looking for an alternative to the crowded Marangu route, and for those who are climbing during the rainy season.

You need at least 6 days for this route, but seven days is recommended. Although the scenery is not as varied as the western routes, Rongai makes up for this by passing through remote wilderness areas for days before joining the Marangu route at Kibo camp. There’s a greater chance of seeing animals on this route, and some tours even require an armed ranger to escort you through the wilderness area for protection. If you’re a wildlife buff, Rongai comes highly recommended.

The Umbwe route is a short, steep and direct route. It is considered very difficult and is the most challenging way up Mount Kilimanjaro. Due to the quick ascent, Umbwe does not provide the necessary stages for altitude acclimatization.

The route is offered at a minimum of six days, though seven days is recommended when attempting this route. The Umbwe route should only be attempted by those who are very strong hikers and are confident in their ability to acclimatize.

Personally, if I were climbing Mt Kilimanjaro for the first time, I would choose the Lemosho Route. If I was climbing for the second time, or it was the rainy season, I’d climb via Rongai for the wildlife.

Also, many of the guides offer to camp overnight in the crater rim. In retrospect, I wish I’d given this a go. But at the time we had no idea how we’d handle the altitude. The combination of the altitude and the stench of the volcanic gases can make sleep quite restless. But I imagine it would be good preparation for higher pursuits in the future.