How To Find Cheap Accommodations for Long Trips 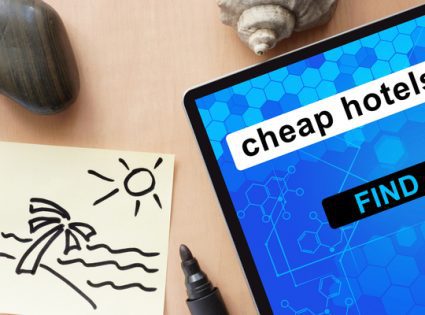 Imagine traveling for a year on a budget you thought would only last a few weeks. That’s the reality when you find cheap accommodation. It can turn your trips from weeks into months and months into years.
I know what you’re thinking… youth hostels are the cheapest form of accommodation. But no, hostels are actually one of the more expensive options. Want to see the numbers? What to see cheaper alternatives? Want more adventure? We can show you how to find cheap accommodations for long trips.

I recently wrote about free accommodation such as couch surfing, woofing, house swapping, etc. But most of those options require you to work or socialize with your hosts for many hours per day.
Sometimes, you just want to travel on your own terms. You don’t want hard labor, you don’t want consecutive drunken nights, and you don’t want to be stuck in one place. So in this post, I’ll cover your options for cheap traditional accommodation.

I’ll use the same scenario to compare each idea. The scenario is for two people, traveling for 3 months (~90 days), in an average-priced area (e.g. Auckland, Montreal, Melbourne, etc). I’ll also use USD as the currency for easy conversion.

Depending on where you are, hostels can cost less than $10 per night for a large dorm room in a developing country, all the way up to $60+ per night for a private room in a developed country. The advantage of hostels is that they’re all over the world and easy to get in to. The downside is that you often have to sleep around noisy youths who haven’t yet learned the art of mutual respect.

Compared to a motel hotel or resort, hostels are relatively cheap. And because they’re easy to slip in and out of, for this $4,500, you can travel all over the place (within reason). The question is… can you handle sleeping with other people for 90 days straight? So let’s be more practical and suggest you hire private rooms for 20% of the time. That should keep you sane and in good spirits.

Still not too bad, and it gives you the opportunity to mingle with other travelers AND some time alone to recharge and regroup.

Wow, a lot cheaper; almost half the cost of a hostel. But unless you’re traveling very slowly, you’ll want to adventure yonder. So let’s assume we take mini-trips that require 20 nights of hostel accommodation. That 20 nights would afford say 6 or 7 mini getaways; plenty for the inquisitive traveler.

Still cheaper than the hostel-only option, but with limitations in some cases. In other cases, immersing yourself in one place for your entire trip can be very rewarding as you learn how locals really live. And arguably, renting a local apartment would be a more authentic experience than hostel-hopping.

Okay, you’ve got me, this one’s my favorite option and the mode of accommodation that I have chosen for an upcoming road trip around Canada and the US.
It can be expensive though, especially if you have bad luck or make a bad decision along the way.

We’re planning to buy an old Volkswagen Camper Van (sometimes called a Kombi, Westfalia, Vanagon, Bus, etc.). The type that’s 30+ years old and hopefully, fingers crossed, in good enough condition to drive thousands of miles. The plan is to buy the bus, not rent it, then sell it at the end.

That’s what I’m talking about! This is clearly a much cheaper option than hostels and apartments. The advantage is you can park anywhere, go anywhere, sleep anywhere, and have a unique adventure no matter what you do. The downside is you’re confined to the space of a matchbox and things can go wrong.

For example, if you have serious engine troubles, you could be up for thousands of dollars. Or if you pay too much for the bus, you could be left with a lemon that no one wants and a big loss. Also, where do you shower? And what about fuel?

So let’s be a little more realistic. Let’s say we lose more on the bus when we sell it. Let’s also assume we have some minor maintenance costs. And we pay for park fees for a few nights (where they have showers, power, water, etc.). As for fuel, this is a difficult one since it depends where we are. We also didn’t include all transport costs for the other types of accommodation, so I’ll only include some fuel.

Still quite cheap, but of all the types of long-trip accommodation, this one has the most room for error. Also, road trips in a hippy bus aren’t always viable in dangerous or very cold areas. But imagine the adventure; I’m sure looking forward to it.

The last type of cheap accommodation is a mix of free and cheap. What I mean is Couchsurfing (or similar) for some of your trip and use hostels (or similar) for the rest.
It’s rare that you’ll find willing couch owners for your entire 3 months trip, so this is the likely outcome for people looking to spend as little as possible.

Not as cheap as you expected hey? That’s because hostels are relatively expensive when compared with the other types of long-trip accommodation. Not only that, but couch surfing is rarely free in the sense you feel obliged to pay something or buy your hosts gifts. Also, couches aren’t as readily available as hostels, so you may find yourself traveling long distances between stops.

Still quite cheap, but certainly not as free as you expected. With that said, there are other free options, such as house swapping, which really is free (other than a $50 bottle of wine left for your hosts). Also, working arrangements are free if you consider your time free. So it’s still possible to get by on a pittance if you’re resourceful, but you’re typically limited by working certain hours or remaining in the same place.

I used HostelWorld.com to find average hostels costs. Craigslist.com for the cost of a hippy bus. Then a range of Google searches and previous experience to arrive at other costs. Of course, they’re all variable, so do the research yourself before making a commitment and allow for a margin of error. Most of all, have fun, explore the world and enjoy the adventure.