Globe Trooper > Adventure Travel > The Diaries of a Jetsetter, The Mongolian Gobi Desert

The Diaries of a Jetsetter, The Mongolian Gobi Desert 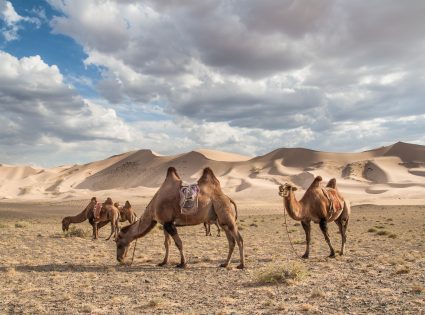 I recently enjoyed a life-changing excursion through the Gobi Desert. Since the end of the expedition, I have tried to regain normalcy, but also some closure. I know I have finished the trek, but I feel like I haven’t completed the whole journey yet.So today, I flipped through my journal for inspiration. Reading back over old thoughts and first impressions was a real treat. Reliving your own footsteps though one of your favorite journeys is almost as exciting as actually being back in the Mongolian Gobi Desert.

For those not familiar with the Gobi Desert Expedition, here it is in a nutshell:

From my personal experience, we had an international team of 13 adventurers set out to cross Asia’s largest desert, the Mongolian Gobi Desert.
That’s 1,000 miles/1,600 km on foot with the aid of 12 Bactrian camels and a support van.
In just 51 days, 7 of the original team of 13 reached the final 1,000-mile mark. I was one of those seven, and one of only 3 women to finish, and one of only four to walk every single step without the use of the support van!

Here are two of my early journal entries:

(in the plane flying from Ulaanbaatar to Khovd)

It’s here. The big day has finally arrived. There’s no turning back now, not that I’ve ever though that anyway.

I’m listening to R. Kelly’s ‘I Believe I Can Fly’ which is quite fitting considering we’re in the air. Ha, I couldn’t have planned it better myself.

I was feeling nervous last night – not about the walk itself, but my supplies. Do I have too little? Do I have too much? Am I forgetting something really important? I was fussing around so much yesterday that I didn’t even have a final bath or pamper session! Preposterous! I did try dying my hair blonde, but it turned out brown. And now it stinks of chemicals, a great feature considering the ultimate lack of hair washing I’ll be doing over the next two months. But now looking out the plane window to a vast landscape, I’m just excited. Maybe it’s a sugar-high from all the mentos I’ve been eating… I’m also a little intimidated by wanting to produce so much from the trek. Knowing that I have to get something out of it – at least one ‘Ah ha!’ moment. Or the pressure of trying to find out what my ‘passion’ is, or worse, trying to ‘find myself’.

(later that night at Camp 1)

We finally arrived at camp after a marathon 10-hour drive. Bumpy as hell. Not like the constant bumpiness of Bolivian roads where it feels like you’re driving over train tracks, but the recurring mega-belly jump bumpiness every ten seconds or so.

Day 3 of a possible 60. My feet are so sore and in so many different places that doing anything becomes a major effort.

(after taking a nap)

Ok, I fell asleep writing that and now my journal has a big blue block at the top where my pen hit the paper for sometime. Lol.

It’s a bit weird that we have a cook, support van and camel boy… Luxurious yes, but I was expecting bare bones stuff. I think I would prefer it if there was a smaller group and we had to cook our own meals (or at least pre-made meals). That’s what camping/expeditioning (the real stuff) is all about. I think it would be so much cooler doing this with 1-3 other people. I actually enjoy this whole tent/camping business. Maybe I could start a business that creates some hardcore tents – because these ones are pretty crap. Half the tent caves in when it’s windy (aka now). I wonder if you could make a lightweight tent without poles?

My knees have started to hurt a lot as well as my hips and other leg muscles that I never knew were there. I think I will lose weight, even with all the lollies I brought – I don’t really crave them yet, maybe later in the trek. But I must drink more water. I’m not going to the ladies bush at all during the day. I need to lighten my daypack too, my neck and back ache. Complainer, complainer, my gosh. The camels are cool, I haven’t really chosen which one’s ‘mine’ yet. I like the one that’s really hairy but he doesn’t listen to me, he always wants to eat and not walk. He reminds me of myself, ha. Then there’s the albino one, but everyone wants him. And I also like the guy with the little blonde puff of hair on his head. He’s much tamer and gentle, oh and he has one hump that lumps to the side, which is weird and ugly in one way, but unique and quirky in another.

Shizers, it’s 10.40pm now, it only just got dark in the last half an hour. We have to be packed and ready to rumble by 8 am. Yay long sleep!