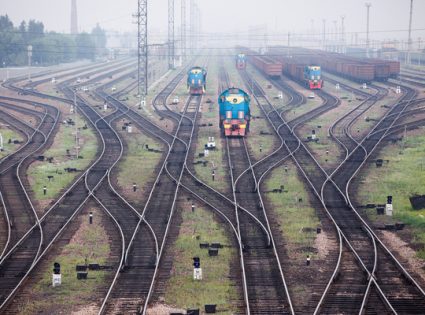 We traveled over 12,000 kilometers; that’s 3,000 more than the Trans-Siberian. On 15 different trains; from general class, all the way to 2AC.
To 12 towns and cities; the Easternmost, Northernmost, Westernmost, and Southernmost railway stations of India.
With 20 undeniably crazy people; from Australia, US, UK, Singapore, Bulgaria, and India. All in 15 days; with only two nights spent on the stationary ground.
We did it! And it really was an epic adventure that only cost a couple of hundred dollars. Finally, we’re in the final days of The great circular Indian railway challenge.

The Great Circular Indian Railway Challenge was never meant to be a relaxing tour. People often asked why we were in such a rush, why we didn’t take more time, and why we planned to spend so much time on trains.

The simple answer is that it was a challenge. But more than that, it was a chance to see some of the most remote parts of India through the lens of train travel in a timeframe that allowed an eclectic group to skip their homely commitments to do it together.

Would we do it again?

Absolutely! We received the warmest and most curious welcomes you could imagine. You just don’t get those interactions on the tourist path.

In Ledo (India’s Easternmost railway station), I remember walking through the town-center like a scene from an old Western movie. The most curious residents would come outside, but others would just peep through their shutters and call the children aside. When I stopped for a shave and a chai at the barber shop, they relaxed and marveled at the transformation of my visage; from disheveled and untidy to snow-white and boy-like.

We saw the great cities too, such as Mumbai, Delhi, Kolkata, and Chennai. And although we only had a few hours to spare, we zoomed around them and made the most of those hours. In a way, our time constraints forced us to move at the same pace as the chaos, which is no easy feat, but certainly eye-opening.

Surprising facts about the GCIRC trip

Could you organize a GCIRC for yourself?

Sure! If you really want an adventure to enjoy with your close friends, I suggest doing something like the GCIRC rather than just booking a hotel at a single destination. It really was an enjoyable adventure that took us to the most amazing places. And not having a professional tour guide meant it felt like an adventure, not just another trip that has been done a thousand times.

To do your own GCIRC, it’s really as easy as this:

As long as you do it far enough in advance, then you can just show up and let the adventure begin. We could always get hotel rooms (for a shower and shave) without a booking, and taxis were plentiful enough that we could regularly skip off the beaten track. Complexity arises when the group size gets over about 6 or so, but still, you can chalk any mistakes down to good adventure.

I must say, there’s something raw and exciting about being on your own expedition without a guide. The act of following an objective and a route, brings about the most unimaginable situations. Definitely worth giving a go, even if you’re a travel novice.

We missed blogging about the last few days of the GCIRC due to a range of issues. It was always a lofty goal to post on the Globetrooper blog every day, especially with fluctuating Internet access. Nonetheless, here are the reports from the final days.

With less than 9 hours in Kolkata, we had grand plans to take on the city, but first we needed to haggle for a cheap room. We hit the jackpot when we scored 1 room for 10 people at INR 1000 in total. Most of our splash-and-dash hotels only allowed 3-to-4 people per room thus far, so this was a big win for the group.

We then traipsed through the streets to find Mother Theresa’s House of the Dying. At first, the idea seemed fine, but the more we thought about it, the more it seemed like an odd place for tourists to visit. In retrospect, if I were destitute or dying, I might like company from whomever wanted to drop by.

However, the House was closed for renovations, so we proceeded on to Mother Theresa’s tomb instead. Then, after hours under the scorching Indian sun, we put our feet up and grabbed a cold one at the Fairlawn hotel. Now we were all pepped and rejuvenated for the next train to Chennai!

On the trip to Chennai, we got to know JP, a French-Canadian living in Kolkata, who just joined the team. Then once we arrived in Chennai, we met a Sikh chap, Jag, who also joined our team. We only had 4 or so hours in Chennai, due to train schedules, so after a quick meal, it was back to the station for another overnight train.

The real highlight of the Rameswaram Express (and possibly the entire trip), was crossing the Pamban Bridge. As I looked out either door of the train, all I could see was water. The air was warm, it was thick with sea salt, and as we pulled into Rameswaram, we could see beaches and fisherman and miles of gorgeous shoreline.

In Rameswaram we visited the temple, bought liquor under-the-counter from a hole in the wall, and walked around the town to take in the sights and sounds. Can you believe a 375ml bottle of Vodka was only about $1.50. Crazy huh?

Kanniyakumari is the Southernmost point of India. Every morning, pilgrims flock there to watch the sunrise. Since we arrived at the station at 4am, we were just in time. So we hopped aboard a rickshaw and headed to the holy place.

With full luggage, 6 of us crammed into a single rickshaw from Kanniyakumari to Nagercoil (where we’d board a train to Kerala). It was quite a sight. Jag was almost sitting on the driver’s lap (and he’s a big guy), I was sitting crouched in the back tray with all the bags, and the other 4 were crammed onto the bench seat, which is normally comfortable for 2. It was good fun as cars zipped by in amazement that 6 foreigners couldn’t afford to travel any better.

After the local train to Trivandrum, we caught a taxi to Kovalam beach. I was surprised that it looked so touristic, and truth be told, it really didn’t feel like somewhere I could enjoy for an extended period with all the touts. Nonetheless, it gave us time to relax before the last leg of the trip.

Although the ‘Gentleman’s Club’ had been drowning their sorrows for most of the trip, the ‘youngins’ (aka ‘the great unwashed’) hadn’t enjoyed a drop together on a train for the entire trip. Since we were on our last leg, we figured it was time to let our hair down (hence, purchasing numerous $1.50 bottles of vodka in Rameswaram).

So, what do you get when you put 8 backpackers, 8 bottles of vodka, a previous 11,000kms of train travel, and a feisty train conductor all on an Indian sleeper train? Well, you get ruckus and chaos and mischief and very loud voices. It was inevitable, but we felt like we’d earned it. There were so many classic moments, but out of context (and sans alcohol) you just wouldn’t find them funny. I guess you had to be there. 🙂

Lauren and I hopped off the GCIRC a little early to settle down in Goa. Drew and Troy had stayed their previously, and many of the GCIRC team convinced us that Goa would be an excellent place to spend a few months.

So the GCIRC, at least for us, was officially over. We really had a ball, even if I’d do things a little differently the next time. Goa looked like a great place to shake off our train feet, but we only lasted there a few days before moving onto somewhere a little more developed and cosmopolitan.

What a journey, and what an adventure. We travel bloggers should certainly get together to do something similar in the near future. Ideas anyone?