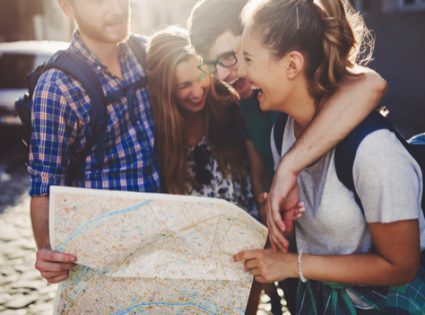 In the blue corner, we have the group tour bus: a diesel-powered road-train full of drunken sex-charged youths, all wanting to say they’ve ‘done’ Europe. And in the red corner, we have the independent traveler: a weathered, leathery, stolid character, who’s at least 10 times more snobby than all of the ‘snobs’ he left behind.
Both exist, but both are extremes. The average traveler just wants to get out into this scrappy world to understand what the heck all the fuss is about. They want an authentic experience, but they also want to meet other travelers with the same passion for discovery. They’re ‘centrists’ if you will.
But should centrists join packaged group tours vs independent group trips? Risk joining the egregious party bus or go at it alone and risk becoming vinegary old schoolmasters?

What is a Packaged Group Tour?

We’re not talking about those coach tours with 30+ participants that fly through towns and stop only for photos of churches and American fast food outlets. We’re talking about grass-roots tours, typically with 5 to 15 people, designed with sustainability in mind, and structured to take you far from the comforts of home. Tours from adventure companies like Intrepid, G Adventures, Geckos, World Expeditions, Abercrombie and Kent, etc.

What is an Independent Group Trip?

We’re not suggesting you become Alexander Supertramp and self-realize yourself to starvation. We’re talking about trips with other people, planned by groups themselves, and adjusted along the way as the group sees fit. One of these independent trips may even include a guided tour or two, but mostly, the group does the planning.

It all depends on where you’re going and what your objectives are. If you’re going to a developing country with a vastly different culture to your own, then joining a packaged group can be more rewarding. However, if you have lots of time and you’re looking for a challenge, going it alone can feel like a real adventure.

Personally, if I could build a good-sized group (say 6+ strangers), I’d prefer to travel to most places in an independent group. However, it’s not easy to orchestrate a trip like that, so in most developing countries, I’d at least join one packaged tour even if I planned to stay by myself much longer.