Traveling 12 Months and Making Every New Place A Home 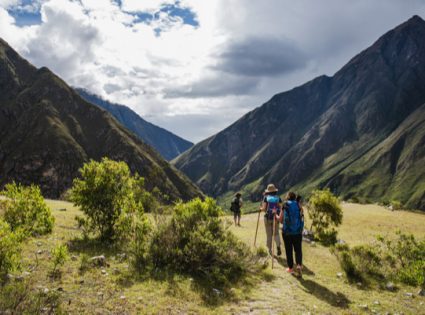 Maybe it’s just me, but as I’ve traveled, I’ve developed an odd habit of making every new place a home. All of a sudden while writing a blog post, I’ll notice the way the window closes or the toilet flushes or how the laundry does itself. Or more significantly, I’ll notice how I love to walk around a city, rather than drive.

I realize this sounds a little facetious but bear with me. This is how I’ll (one day) make a new home using lessons learned from traveling around the world. I’d love to hear if you have this fascination too.

Making Every New Place a Home

There’s no question, I’ll build my new home in a city where I can walk to most places. Montreal and Chiang Mai are great examples. Both cities are large enough to find most things but small enough to avoid taxis and public transport. This requirement isn’t about health or fitness or the environment; I just like to walk to places.

Also, I want to be in a vibrant city, rather than a suburb or the country. I want to live where the action is, somewhere I can just look out the window and be inspired. I’m not only thinking about myself but our future little troopers too. I love the idea they’d be surrounded by world events. Events such as the UN convening, dignitaries visiting, famous authors speaking, etc. So, rather than a sandpit in the backyard, I want the world to be their playground.

Smaller cities are often closer to the wilderness. I love the idea of getting away for the weekend for rock climbing, snowboarding or canyoning. Just like we did on rare occasions in Australia. So my new city would have to be surrounded by nature, which I suspect applies to most cities.

When Less is More

I love the idea of a tiny place with the very efficient use of space, just like many of the guesthouses and hostels we visit. Also, I find that less space helps to focus on things that matter most because I don’t have to worry about so much space filled with so much crap.

These are the things I’ll explicitly do without:

Very few of the guesthouses and hotels we visit have these items or amenities, and we do just fine without them. In fact, we do better than fine. We get out into the city or wilderness and have much more fun.

I’d also do mostly without hot water. I’d just have a dedicated electric water heater in the shower. Just like my current guesthouse and only have cold water piped through the house. The dishwasher would have an electric element, just like the one we installed in Australia before leaving. I haven’t researched energy usage (that’s not what this is about), but I suspect keeping a big tank of water hot all day isn’t very efficient.

I can have very little cupboard space (food and clothes). We’ve slowly become used to living with a small wardrobe. Heaven forbid, you’ll see us wearing the same thing now and then (the reason the Duchess was recently scolded). I love living as if we can just pick up and travel without thought. Plus if we rob a bank, the getaway will be quicker. As for food, I never understood those huge refrigerators. We could store enough fresh food in a bar fridge for a family of 10.

None of this is new. There’s a real market out there for small efficient homes. And it’s not just about cost or land space or the environment either. It’s a strategy to live more intelligently.

When More is More

Not everything in my new home would be smaller. If anything, what I’ve learned from travel is that some things require much more attention. For example, social spaces. Part of the strategy for having smaller bedrooms, kitchens, and bathrooms is to allow for more room to host people.

For one, we’ll certainly become more active couch-surfing hosts. We tried hosting when we spent 3 months in Montreal and it was good fun. That means we couldn’t live in a box where only two people can sit and eat. So we’d have more room for entertaining and a sofa bed at a minimum. We’d become a glorified hostel if possible.

Drinking water is another lesson learned. I found if it’s close by, then you tend to drink it more often and don’t need to buy bottled drinks. So in my house, with only cold water in the pipes, I’d have drinking fountains all around the house.

Also, I’ve found a dedicated workspace is vital. I’d love to have a workspace with exposure to the outside, but not a view. A nice view is too much of a distraction. I’ll constantly drift off into non-focused thought. Maybe just an open roof or window. But it must be dedicated and quiet. And fast, reliable WiFi is a must.

It’s quite funny that I think about this when in a recent post I also talked about potentially traveling forever. Maybe it’s my anchor to keep me sane when things get a little off-kilter. You already know we love Montreal, but I don’t think my hot water policy would work there in winter. And I love Chiang Mai so far, but I feel it’s a little too touristy to live long-term. Who knows. We’ve traveled for 12 months, but haven’t even scratched the surface of liveable cities. So, for now, it’s just an ongoing mental project.