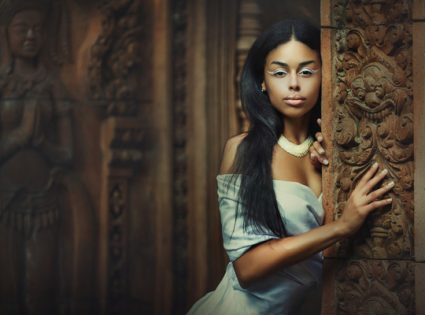 A great way to make Cambodia holidays exciting is to view the country through the prism of cinema. Three major films have been shot in Cambodia. Why not follow in the steps of the filmmakers and crew during your stay? It is possible to arrange tuk-tuk tours of pretty much anything you want to see in Cambodia. You can ask your accommodation manager to help you negotiate and plan the tour with a driver.
Here we reflect back on movie tours of films that were created in Cambodia.

The Killing Fields is the most historically important film to be shot in Cambodia. It follows a New York Times journalist covering the civil war in the country with a local journalist. As the American military leave, the local sends his family with them but stays behind himself to help the American journalist continue covering the war. Then the Khmer Rouge moves in on them. Based on real events, this film will give visitors to the Killing Fields of Choeung Ek and Tuol Sleng Genocide Museum a greater understanding of what the site means to the people of Cambodia.

Two Brothers tell the story of two tiger cubs that live in the ruins of a temple in the jungle. They are separated when an explorer comes to raid the temple. The explorer takes one of the cubs but is later arrested for raiding the temple and the cub stays with the chief of a village. The other cub remains until picked up and put in a ring to fight its brother years later. The Tigers end up recognizing each other and the fight doesn’t happen. The Tigers then escape and make their way home. The film was shot partly in Siem Reap and partly in Phnom Penh. The temples at Angkor are where the Tigers’ home lies.

The temples of Angkor are so awe-inspiring that they hardly need a large celebrity to have run through them to make you want to go there, but it is interesting to hear locals describe the Angkor Thom ruins as the Tomb Raider tomb, following scenes shot there.

In Tomb Raider, several characters visit Angkor Thom to try and recover the Triangle of Light, an ancient metal triangle that has the ability to alter time and works in accordance with planetary alignment. Half the triangle is in the Cambodian tomb, half in Siberia. Lara Croft must find the pieces, join them and then destroy the triangle. Angelina Jolie, who played Croft, famously applied to and adopted her first child from Phnom Penh, after having visited Cambodia when she was in Tomb Raider.

It used to take film crews a couple of months to apply for a permit to film in Cambodia but this has been reduced to ten working days and seven films were shot in the country in 2010, compared with just one or two in previous years. Cambodia has struggled to get back on its feet following the terrible atrocities committed under Pol Pot’s Khmer Rouge regime and the film is just one of a number of ways of bringing money into the struggling economy.