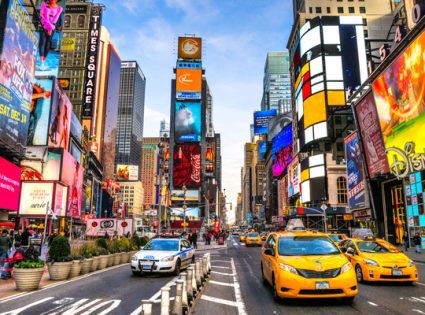 What do Gossip Girl, Ghostbusters, and Goodfellas all have in common?
They were all set in New York City, along with other favorites, Friends, Crocodile Dundee, Law & Order, Scent of a Woman, Seinfeld, As Good as it Gets, Sex and the City, Cruel Intentions, Teenage Mutant Ninja Turtles, Boiler Room, The Apprentice, and many more.
This gives anyone traveling to New York for the first time, an advantage. You know what it’s going to be like, you’ve heard about Broadway and the lights of Times Square, you know that the taxis are yellow… yes, even the smallest things count when you’re going to a new place.
Here we explore a few of my favorite must-see attractions while visiting New York City

We arrived in New York Penn Train Station at 10.30 pm, to be greeted with our first and last scam.

Taxi? Taxi! You need a taxi?

As soon as we walked out of the train station, a big African American guy, posing as a taxi driver, asked if we wanted a taxi. Of course, we did. So he took our bags and told us to follow him to his taxi. Of course, it wasn’t his taxi, and in a momentary lapse of judgment, we paid him upfront, and, well, the rest (including our $12) is history. C’est la vie, hey?

I decided not to read up too much on New York, as I thought I had a pretty good grasp from all the movies and television shows. Plus we were able to get a New York CityPASS each to see the main attractions.

Manhattan is overflowing with trendy neighborhoods and amazing restaurants the city that never sleeps is one of the most amazing places in the entire world. You will be able to find amazing hotels, and Airbnb around the city at great prices by using apps like HotelsTonight and Manhattan website to located great places.

If you’re a traveler who enjoys museums and seeing a city from it’s best vantage points, this is the pass for you. For $126 you get entry into these attractions with New York CityPASS:

These things are, no doubt, the most popular attractions for first-time New York City visitors.
But you really have to be committed to doing at least 4 of these things for the CityPASS to be worth it.
And they all do take time, so we recommend it if you have at least 3 days to explore the city.

The Bodies Exhibit is a great addition to your itinerary, and just across the road from the Circle Line Cruise. It’s not your normal run-of-the-mill museum with historic masterpieces though. You’ve been warned. Very educational yet graphic, but still suitable for kids with an interest in science.

Discover the secrets of real New York City pizza by foot or by bus, it’s the cheesiest tour ever with Scott’s Pizza Tours.
My travel partner is an abysmal pizza lover, so I surprised him on Valentine’s Day (also his birthday) with this unconventional tour to remember.
We spent a few hours walking around New York, in particular, Little Italy where we tasted some fresh mozzarella and three very different pizza parlors.
We sure got our pizza fix that day, and so did our tour guide with a present from one of the pizza restaurants.

The Ginger Man is a great pub to relax and enjoy some specialty brew, right in the middle of the city. After a long, long day shopping and walking the chilly streets of New York, we sat down to one of the best cheese platters and an arrangement of beers ever. I’m not a big beer fan, so the sweet St Louis Framboise came as a nice surprise while Todd and Norbert polished off the 8 different samplers. And talk about variety, they have a new beer menu every day!

A walk through Central Park and a stroll on Wall Street are also pleasant, but the one thing that we didn’t end up seeing was a Broadway show. This is a must for anyone who enjoys theatre or music, and a good excuse for us to return at a later date. Obviously, these are just the main things, frequent visitors and residents of New York will probably hate me with ‘What about Brooklyn?’ comments, but it was my first time and in winter. I’ll return for Jersey Boys when it’s a tad warmer thanks.