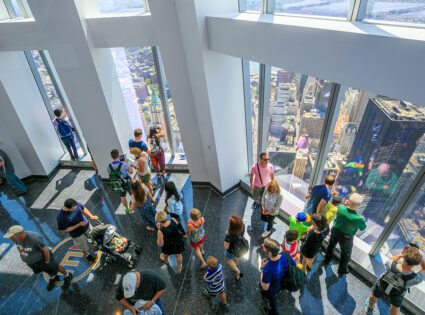 New York City bus tours are great ways to enjoy the city from the comfort of a top-rated tour bus. Some are open-top tours, some are private tours, and some are in between, offering climate-controlled comfort; try them during the day and night to get a different view of the city, or check out our roundup of the ten best and most fun New York City bus tours below and let the fun begin!

This tour is great for travelers with limited time when visiting New York CityThe duration is 6 hours and starts at Midtown Manhattan, where you will meet your guide and fellow tourists. You board a minibus and ride through Times Square, passing by Rockefeller Center and Radio City Music Hall.

You are allowed a short break to check out the area. Next, head to Fifth Avenue and Madison Square Park, with enough time for photos of the Flatiron Building and the famous Empire State Building. From there, it’s Trinity Church and the 9/11 Memorial.

You also see some of the oldest architecture in Manhattan in South Street Seaport. Next, hop on the Staten Island Ferry and enjoy amazing views of the Manhattan skyline.  You can see Ellis Island, the Statue of Liberty, Governor’s Island, and Brooklyn Bridge.

If you are planning a trip to New York City, make this your first thing to do, you may find sites that you would like to check out in more detail or hear about places you would want to visit from the very informative guide.

Come hungry and bring sneakers as you enjoy the best of both worlds with a  Half-Day Hell’s Kitchen Food Tour and Central Park Stroll in NYC.

The Hell’s Kitchen food tour has been featured on shows like Anthony Bourdain’s No Reservations and in countless articles about what to do in NYC, making it one of our most popular tourist choices.

First-time visitors will have the best time wandering the streets of Hell’s Kitchen and the tree-lined paths of Central Park with this combo tour; what’s better than taking in the tasty scents of the restaurants as you walk by? Enjoying said delicious meals, of course!

To visit New York City during the day is captivating and entertaining but to visit by night with a guide is a very New York thing to do.  The Tour departs from Times Square, where New York got its title “The city that never sleeps from,”  so get there early to enjoy some pre-tour time.

The tour takes you to Little Island, The High Line, Pier 17, and Grand Central Terminal 20 min stops for a quick look around and photo, and then to the Edge,  NYC, for about an hour.

Tickets to the Edge are not included but are a great attraction with glass floors, a bar, and 360 magnificent views of beautiful Manhattan.

Take a full-day (7 hours) New York City must-see tour with small-group access to The One World Observatory. Everyone meets at 46th St and Broadway (Times Square).

Stops include Rockefeller Center, Grand Central Terminal, 911 Memorial, and ending at One World Observatory, the highest building in the Western Hemisphere.

Some well-known sights and exhibits to see while driving by are The New York Public Library, The Chrysler Building, The New York Stock Exchange, The charging Bull, Brooklyn Bridge, and the Statue of Liberty, to name a few.

A guided bus tour is one of the best ways to see NYC and get around. Our Best of Brooklyn Half-Day Food and Culture, Bus, and Walking Tour takes you to all our favorite places in Brooklyn, all in the comfort of the climate-controlled bus.

The tour leaves from West Village, Manhattan, and stops in  Williamsburg, home to trendsetters and Hasidic Jewish and Italian communities, where you can enjoy a slice of Neapolitan-style pizza. At the same time, your guide shares stories about the area’s history.

Next, head to nearby Greenpoint, where you can find a convergence of New York’s Polish community, and try some traditional kielbasa and pierogi. Enjoy views of Prospect Park and the Brownstones as you go by.

From there, it takes you to Carroll Gardens for more Italian and DUMBO for a treat at Jacques Torres Chocolate. Finally, you get to admire impressive waterfront views of the Manhattan skyline before the tour brings you back to the West Village to conclude the tour.

Along with experiencing some excellent food, drink, architecture, gardens, and history, you’ll learn about our community’s role in making Brooklyn a world-class city.

Get to know all the Boroughs of New York City with Amigo Tours, lasting about 7 hours and starting at Harlem in Upper Manhattan. The Guide will give you information about historical sites such as the world-renowned Apollo Theater.

The tour then takes you to the Bronx, home to the most famous baseball team in the world- The New York Yankees and home to hip hop music and cultural street art while walking along. The tour continues across the East River into Queens Borough, a very ethnically diverse county.

Flushing Meadows Park is next, home of the US Open (one of the oldest tennis championships in the world), the New York Mets baseball team, and the Unisphere (leftover from the 1964 World’s Fair), which has been used to film many movies like Men in Black.

Next, up is Brooklyn, visit the Williamsburg neighborhood and Crown Heights, home to one of the largest Hasidic Jewish communities.

Finally, stop at Coney Island, a fun destination for all New Yorkers for generations. You can enjoy a walk on the boardwalk and dine at the original Nathan’s restaurant before heading back to Manhattan to your departure address.

Big Bus New York Hop-On Hop-Off Open Top Tour is one of the most exciting bus tours in all of NYC. They divide into two groups. The blue line offers five stops to enjoy Uptown, and Redline offers ten stops to enjoy Downtown Manhattan.

Even better, they provide LIVE commentary during your ride, offering you a natural look into what life is like in New York City.  Show your voucher to a Big Bus staff member before boarding for a day pass.

Check out the website so you can plan a fulfilling day around your favorite stops while avoiding the hassle and high costs of taxis.  You can hop on at any one of their designated stops.

If you love movies and TV shows, there’s no better way to explore Manhattan than on a tour that uses locations from these productions as a jumping-off point. NYC TV & Movie Tour (On Location Tours) is one of our favorites.

Relax in a climate-controlled bus as your guide plays fun trivia games about TV shows, movies, and the City in general.  See cool spots like Central Perk, where Rachel meets up with Ross and Phoebe for some serious girl talk.

This New York bus tour takes you to Alexander Hamilton’s haunts and hangouts in Lower Manhattan, Greenwich Village, Midtown, and Harlem—where he lived, worked, and went to school.

The narrated tour will also visit essential sites from his life.  Hear about his life in America just before the Revolution and how he quickly gained influence in the government.

His role as Secretary of the United States’ treasury, giving birth to the famous New York Stock Exchange, is not to be missed.

He has also witnessed George Washington being sworn in as the nation’s first president. The tour ends at one of the oldest bars in New York City, where Alexander Hamilton used to drink with George Washington, where you can raise a glass,s and have a toast to the Founding Fathers.

The park offers visitors a variety of recreational activities, but if you’re looking for a more leisurely activity, Central Park Pedicab Guided Tours are available to get you through the entire park in under 3 hours.

Some attractions you can see along the way are the victorian Garden amusement park and ice-skating rink in winter, Chess and checkers house, the oldest carousel in the city, and a Dairy house from the Great Depression.

Pass by the remote control boats from the movie “Stuart Little,” Worldwide famous Bethesda Fountain from dozens of films, including “Home Alone 2”, the giant playground in the park, the Strawberry Fields, and the John Lennon Memorial.

A New York City Bus Tour can make your trip to NYC unforgettable. Check out these 10 Bus tours and pick the best one that best suits you and your fellow travelers to fully enjoy New York City and all that it has to offer.