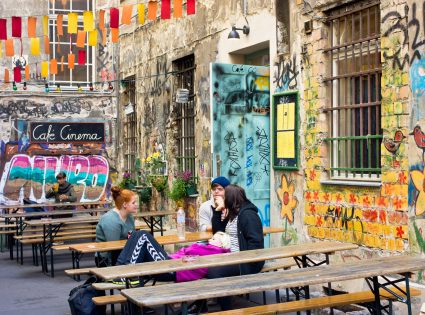 Immediately after spending some time in Berlin, it is easy to appreciate the people and the differences in their everyday.
The people of the city are liberated and everyone is doing their own thing. Locals don’t seem under the big brother spell, opposed to people in say New York, Toronto or Sydney. Berlin has a vibe, and they seem very free-thinking (and free-acting).
That said, Berlin isn’t without its quirks. In fact, because you expect Europe to be more “normal” than say other destinations, you tend to get a kick out of each and every peculiarity.
Some things still blow my mind; they make no sense at all. But here, its just the norm.
Who would have thought that there are so many fascinating cultural peculiarities of Berlin?

The traffic lights are green, the pedestrian lights are red, but there isn’t a car in sight. Not here, not there, not anywhere.
Nonchalantly, I go to take a step. But out of the corner of my eye, I notice the other 20 people don’t even dare.
The pedestrian light is red, and red means stop. So, no one crosses. We all just wait. I thought it was just me. Maybe I’m too impatient. Maybe all of my travels have rubbed off on me.
But over and over I noticed people would just wait on the quietest streets without a hint of even wanting to cross to get on with the day.
It started to drive me nuts. Just cross goddammit!

I now just cross when the time seems right, but my goodness, the stares!
I read Germans consider it bad etiquette to break rules in front of children. I guess that’s a good point if you’re grooming them for the Stasi, but then who am I to tell people how to raise their children.
Of course, this isn’t a big deal by any stretch, and if anything, I guess it’s a little charming that people here are so patient.

While obeying red lights has a certain charm, square pillows are a downright abomination.
I’m not talking about those square decorative pillows that adorn king-sized beds inexpensive hotels.
Nope, I’m talking about regular pillows that you sleep with. And the square ‘regular’ pillows in Berlin aren’t just like normal pillows with four equal sides.
Nope, they’re just the same as those huge hotel pillows, but with a consistency more like a bean bag than a pillow. Now before you judge me as pedantic, just try to sleep with one of these huge beasts.
You know, maybe it’s because everyone here is so tall. Maybe those huge square pillows are ergonomically more suited to people over two meters tall.
Nope, I’m not buying it. Berliners, please, abandon the square pillow.

Imagine a shower that’s really a bath, except it has a big hose and a shower head that extends from the bath spout.
Oh, except there’s no show curtain and there’s no fixture to hold the hose above your head. Well, in Berlin, that constitutes a shower.
And it’s reached the point where even new houses are implementing this old-world Berliner ‘ingenuity’. Check out Airbnb, Wimdu or any apartments in Berlin and you’ll see what I mean. But you won’t grasp the total and utter inconvenience until you actually shower in one of these things. You only have one hand free, because the other is holding the unruly serpent, and your entire bathroom becomes soaked.

Berliner shower baths are a good example of needing to leave the past behind.

Where do you live? Oh, number 13? Is it a house? No, an apartment. So, which apartment? Ummm, my apartment. Yeah, but which one is yours?
The one with my name on it. Why is your name on your apartment? How would you know it’s mine without my name? Well, you’d have a number.
Why would I have a number, you already know my name. Um… good point.

So yeah, Berlin apartments don’t have numbers, they have the names of the occupants.
And those names are written and placed alongside the doorbell. Sounds crazy, but as per my dialogue above, it makes sense. Criticising the absence of door numbers makes me feel a bit like that American guy off the Amazing Race who said: “[Chinese people] don’t even understand their own language”. Here I am saying that Berliners need numbers on their doors when all along it just makes sense to have your name.