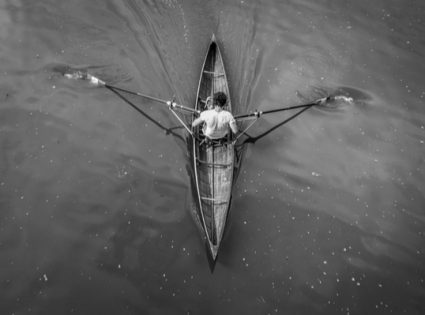 Ocean rowing requires incredible mental courage and determination. Being woken up at 3 am in the morning for yet another two-hour shift on the oars slowly wears you down. You have to be prepared to deal with seasickness, salt sores, blisters, and delirium. It is, therefore, no surprise that ocean rowing is often compared to a polar trek or Everest climb.

But it’s not all bad. On an ocean rowing expedition, you encounter nature in the raw. Dolphins, fish, and turtles swim up alongside your boat, and you witness the most incredible night skies, dawns, and sunsets of your life. One day you row through eerie mirror calm conditions and the next substantial foaming waves batter you. Being thrown into such an extreme environment with a small group of people forms friendships that last a lifetime.

So it was for all of these reasons that, with just a week’s notice, I said yes to joining an Atlantic rowing expedition earlier this year after a skipper friend of mine lost one of her crew to injury. After witnessing the start of two Atlantic Rowing races and spending the past few years making frequent visits to see ocean rowers and their boats I thought I’d seen every sort of ocean rowing craft imaginable.

How wrong I was. Nothing could have prepared me for Big Blue. The first thing that struck me was her size.

After suffering 73 days of incredibly cramped conditions onboard an ocean rowing pairs boat back in 2007, I couldn’t believe my luck! Here was a cabin that I could move about in, a proper toilet instead of the usual ‘bucket and chuck it’ and enough space that a few people could relax outside. And to top it off I would have a comfortable bunk (albeit one I would have to share with another sweaty, salty rower as we alternated continuous shifts of 2hrs on the oars with 2hrs rest).

I knew that the additional comfort of this boat would make all the difference in the world, and of course, it did. It gave me the freedom to focus on pulling hard on the oars and enjoying the company of my teammates.

For some of the crew completing the expedition fulfilled their dream of doing that one big thing in their lives, for others it was the first of many such adventures, and for others, it was merely another notch on their adventure bedpost.

In 2012 we will be offering another crew the opportunity to row Big Blue from Barbados-Jamaica-Mexico and fulfill their dreams. The next expedition will be the first Caribbean Sea rowing expedition. It will take place in March and April and will cover a total of 2,000 miles. It is being staged in two legs with a short break in between. We are now recruiting crew members for one or both legs. You will need to be available for a minimum of 3 weeks.

This is the first ever Caribbean Sea crossing by ocean rowing boat. It will be staged in two legs from Barbados to Jamaica and Jamaica to Mexico. The legs will be long enough to give you the flavor of a full ocean crossing while remaining short enough to fit around existing commitments. The crew will consist of 14 rowers and two skippers. Crew members and skippers will take it in turns to row and rest in alternating shifts of 2hrs on, 2hrs off.

Leg 1 Port St Charles, Barbados – Montego Bay, Jamaica 1350 miles
Leg 2 Montego Bay, Jamaica – Cancun, Mexico 650 miles
Covering a total of 2,000 miles, the route will constitute a full Caribbean Sea crossing east to west. Our time in Jamaica will coincide with the island’s biggest sailing regatta of the year, the Montego Bay Easter Regatta. Family and friends are welcome to join you in port.

We are looking for an international crew of men and women aged 18 and up. Expedition and offshore experience is advantageous but is not a requirement. Nonrowers will be expected to learn the basics of sweep oar rowing technique before the journey. A good level of fitness will be required. All potential crew members will be vetted before being offered a place on the crew.

Big Blue is the only ocean rowing catamaran and largest ocean rowing boat in the world. In was constructed in 2010 and, in early 2011, it made its maiden voyage from Morocco to Barbados. It has eight sweep oar rowing stations and eight comfortable bunks.

Nate Fulcher will skipper the crew. Nate is the former boson of the Royal Engineers Commando Yacht Club and has thousands of offshore miles under his belt. He currently divides his time between skippering sailing crews and leading expeditions and adventures.

The fee covers a place on the crew, food, and equipment on board. Also, a crew t-shirt, a personal page on the expedition website with space to promote your sponsors, and a finish party. It excludes meals and accommodation while in port, travels to the start and from the finish, sat phone minutes, personal insurance, and personal items such as clothing and toiletries.