That Awkward Moment of the Culture Shock Blues

It sounded like a great idea at home: travel to a developing country, see how the locals live, learn a thing or two about life, eat great food, make new friends, and return home a better person for it all.
Fast forward a few weeks, and there you are unpacking again in another rundown hostel, exhausted. After a luke-warm shower (if you’re lucky), you stare into the faded mirror, wondering why on Earth you thought you liked to travel. It’s just hit you, that awkward moment of the Culture Shock Blues.

But just hang in there, it’ll be gone in a day or two. It was bound to happen anyway. We build lives where routine rules and then we’re surprised by the discomfort of uprooting it all. It happens to most of us; you’re not alone.

Our First Dose of Culture Shock

Lauren and I first experienced the culture shock blues in Egypt. We were almost robbed outside the airport, we had nowhere to sleep the first night, and we were constantly swarmed by aggressive touts. It was tiring to the point that we questioned why we traveled.

A couple of days later, after meeting a few locals and bumping into other travelers, we adapted. We brushed off the touts, walked with more confidence, revealed in the exotic food, took pictures, made friends, found loads of adventure… it was suddenly what we originally expected.

How Do I Prevent Culture Shock? 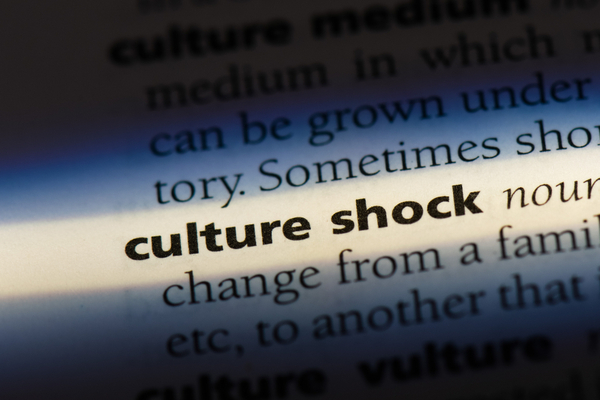 How Do I Deal with Culture Shock?

You pass an old woman sitting in the street. You can see it in her eyes; she’s wishing you’d go back to your self-righteous Western country and take your stupid democratic ideals with you. (Of course, you’re just being paranoid and she’s not thinking anything of the sort.)

You muster the courage to utter the words, ‘Buenas Tardes’. Suddenly, she looks up, her eyes stretch open, she grins from ear to ear and says, ‘Ahhh, Buenas Tardes Amigo.’ All it took was a kind gesture in the local tongue.

You wouldn’t expect everyone at home to smile. In fact, you probably wouldn’t walk along smiling either. But now that you’re in a new country, you’re vulnerable and expect everyone to be your best friend. It’s not entirely unreasonable; just deliver a few local words with a big smile and most people will welcome you, making it all a little easier.

2. Get Out and About

Sitting in your hostel or hotel just prolongs the shock. Get out there, explore the streets, find some adventure. Start small, just buy a bottle of water, then maybe sit down for a small lunch. And if you’re feeling really adventurous, find somewhere to get a haircut. It’s a great way to assimilate and explore local tradition.

The culture shock blues often spawn from a fear of safety and communication. Getting out and about-faces those fears head-on. But safety concerns are sometimes really warranted. So start by exploring in the daytime and with someone else, if possible. Keep your wits, but don’t be too standoffish. Be willing to talk, even with touts, but keep your ears pricked and mind alert.

3. Meetup with Other Travellers

After one or two days, you’ll be totally relaxed in your new environment. But in the interim, why not meet up with other travelers who are already comfortable? They’ll share their best experiences, teach you some of the languages, and just make you feel a lot more relaxed.

Meet other travelers, they’ll be going through the same blues as youAs much as we’d like to think the best interactions abroad are with locals, often they’re with other travelers. That’s because you tend to have more in common with other travelers. It has nothing to do with your socio-economic status, family values or political beliefs, it’s simply because you’re all traveling. Of course, not all travelers get along, but you’re certainly more likely to find friendship in people with similar interests, no matter where you go.

When You Just Can’t Handle It?

A string of bad experiences can just be too much for one person to handle. As tough as you think you are, when you’re mugged or assaulted or ridiculed, you just need time to regroup. So if you find yourself thinking about returning home (and you know deep down you don’t want to), find a place to take some time off.

Depending on your finances, spend a couple of nights somewhere more relaxing. Get your own room, order some room service (I recommend the Club Sandwich), treat yourself to some fine wine, put your feet up, talk to your family over Skype, and just take it easy. You’ll be ready to hit the road again in no time.