The Science Behind Altitude Sickness, Hypoxia, and AMS 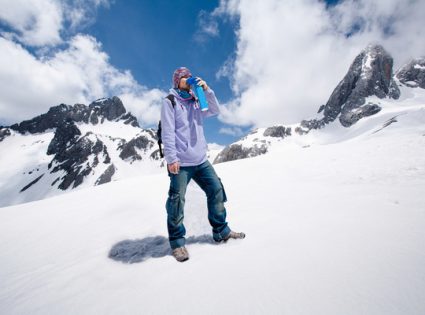 Unfortunately, there is no insurance for adventure travel, and there is always a what-if involved for personal risk.
There’s risk of injury, fatigue, exposure, and disease. But when it comes to altitude, things change.
Not only do we become more susceptible to these risks, but we expose ourselves to an additional risk: Acute Mountain Sickness (AMS).
AMS is quite literally debilitating. In addition to the typical effects of altitude (shortness of breath, sore muscles, and suppressed appetite), one can sufferer experiencing splitting headaches, rib-fracturing coughs, and a nauseous delirium. While those symptoms sound awful, there’s something even worse about AMS. Here we explore the science behind altitude sickness, hypoxia, and AMS.

An Invitation to Perish

The reduced levels of oxygen at altitude lead to something called hypoxia.
Interestingly, hypoxia tends to make you feel better, rather than worse. And when I say better, I mean even better than usual.
You become a bit tipsy, you hallucinate, you accept your situation, you even start to welcome it.

There is a BBC documentary called, ‘How to Kill a Human Being‘, claims the most humane way to kill someone is through hypoxia.
The scientists suggest it’s the only path to death that’s remotely close to being ‘pleasant’.

And that’s what you have to deal with as a mountaineer with AMS; a welcoming invitation to perish.
You’ve probably heard about mountaineers in the Himalaya walking aimlessly, stripping off their clothes, and lying around like it’s a day on the beach. Well, that’s hypoxia and AMS.

Hypoxia is experienced at altitude because the atmospheric pressure becomes lower as altitude increases. And with lower atmospheric pressure, we get less oxygen. Keep in mind, the percentage of oxygen in the air doesn’t decrease (air still contains about 21% oxygen), but the density of the air decreases.

On the summit of Everest (8,848m), the amount of oxygen in one breath is about a third of that at sea level. So in every breath, we receive two-thirds less oxygen, plus we’re exerting ourselves by climbing in heavy gear, up and down rugged terrain, and in the most inhospitable climatic conditions.

Sure, that’s what ends up happening; we breathe quicker to take in more air. But, the problems don’t stop there. As we increase altitude, the amount of water in our lungs increases, which reduces the space for oxygen.

At just over 19,000m, your lungs would be full of water.
That means it wouldn’t even matter if you were breathing pure oxygen because there would be nowhere for it to go.

So, on top of having two-thirds less oxygen at the summit of Everest, we have less room in our lungs to hold inspired air and less surface area to absorb oxygen. Let’s look at the numbers:

Now, after finding we have only 25% of the oxygen available at sea level, we find there’s less pressure to force that oxygen into our blood.

The technical terms for this process is a gas exchange. It involves the switch between carbon dioxide and oxygen in our lungs across various membranes. This process becomes much less efficient at altitude because our bodies rely on atmospheric pressure to push gases through these membranes.

Luckily, our bodies increase the chemicals used to bind oxygen to deoxygenated hemoglobin. It gets even more technical, but for all of these responses, our bodies work overtime.

Mountaineering Stresses Our Bodies Beyond Belief

Survival [in mountaineering] is only possible because of… sustained hyperventilation.

To combat all of the negative effects of high altitude, we need to constantly breathe like it’s our last breath. Not only do we have to breathe quickly, but our heart rate must increase to pump blood (with much less oxygen) around the body to support the activity of climbing. Add to this the extreme cold, and mountaineers really do operate on the precipice of death.

The limit of a mountaineer is when his/her resting heart rate meets his/her maximal heart rate. When this happens, movement is virtually impossible.

So just to recap the issue of high altitude on the body: