13 Things to Do in Chicago: The Ultimate Travel To-Do List 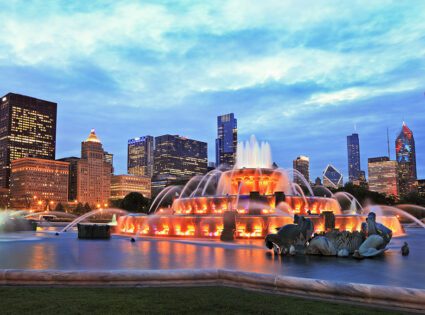 It’s no secret that Chicago is one of the best cities in America to visit, with countless attractions and events year-round that will capture your imagination and delight even the most jaded traveler. The problem, however, can be planning out your time there so that you don’t miss out on any of the must-do activities this great city has to offer.

Here are 13 things to do in Chicago to help get you started planning the perfect trip to America’s Second City!

The Art Institute of Chicago

One of the best things about the Art Institute of Chicago is that it’s free for Illinois residents, so there’s no excuse not to go and see what you’ve been missing. With an extensive collection, a beautiful building, and great public events, this museum definitely deserves its spot on our list.

Located in the heart of Chicago, the 360 Chicago Observation Deck offers unparalleled views of the city and beyond. Rising nearly 1,000 feet into the air, this iconic tower offers 360-degree panoramas of Lake Michigan and the surrounding skyline. Whether you’re looking for a unique place to catch a breathtaking sunset or just want to admire the beautiful city below, 360 Chicago is the perfect destination.

With its state-of-the-art amenities and knowledgeable staff, this top attraction has something for everyone. Whether you’re a local resident or visiting from out of town, don’t miss your chance to experience 360 Chicago!

One of the most iconic landmarks in Chicago is Cloud Gate, also known as The Bean. This sculpture by Anish Kapoor sits at Millennium Park and reflects the sky. You can see it from so many different angles since it’s a reflective surface that has no right or wrong side. It’s a fun thing to take pictures with and one of the must-see attractions on any trip to this city.

This massive public art project is the first of its kind in a U.S. city and the third largest park of its kind in the world. With stunning views of Lake Michigan, Millennium Park is a great place for sightseeing, with attractions such as Cloud Gate (aka The Bean), Jay Pritzker Pavilion, and Crown Fountain. Stop by for concerts during the summer or ice skating during winter!

The Field Museum is a museum of natural history and human culture. The museum was founded in 1894, and opened its doors on October 20th, 1904, making it one of the oldest museums in the United States. It is also home to Sue, the largest and most complete T. Rex skeleton ever discovered.

The Magnificent Mile is one of the most iconic and well-known strips of real estate in the city of Chicago. The mile-long stretch along North Michigan Avenue is full of high-end shops, world-class restaurants, and luxury hotels, making it a popular destination for both tourists and locals alike. The area has earned its moniker due to its outstanding architecture and stunning views of the city’s skyline, and it has become a hub for luxury shopping in the Midwest.

Whether you’re looking to splurge on a new designer handbag or explore some of the city’s best happy hour spots, The Magnificent Mile is sure to delight. So if you’re looking for an experience that’s truly magnificent, look no further than this one-of-a-kind landmark.

Chicago’s Riverwalk is one of the best places to walk, run, or bike. It connects many different neighborhoods and offers a variety of restaurants and shops along the way. You can also find some great views of the city from various points along the riverwalk.

Since 1875, Lincoln Park Zoo has been a favorite destination for families and city residents. Home to more than 1,000 animals from around the world, the zoo is a great place for children of all ages and interests. Visitors can explore habitats for tigers, polar bears, lemurs, monkeys, gorillas, and meerkats.

The Chicago Cultural Center was built on the site of the 1893 World’s Columbian Exposition and is one of downtown’s most iconic buildings. Designed by Dankmar Adler, who also designed the first steel-frame building in America, this Beaux Arts masterpiece stands as a monument to human ingenuity and creative expression. Its five floors are home to an art gallery, theater, library, and ballroom.

One of the best things to do in Chicago is visiting the Garfield Park Conservatory. The conservatory is a botanical garden located on the city’s west side that features thousands of plants from around the world. You’ll find over 2,000 types of orchids and a butterfly exhibit where you can observe butterflies up close. They also have a waterfall, an indoor desert, and plenty of fountains for you to enjoy. Admission is $8 per person and children under 5 are free.

The Buckingham Fountain is a landmark that no traveler should miss. There are usually food vendors nearby, so you can enjoy the view and indulge in a meal or snack. Take a picture and share it with your friends on social media.

A trip to Chicago isn’t complete until you’ve taken a selfie with one of these walls of flowers. Visit on your birthday and they may put your face on one!

Visiting Skydeck Chicago – Willis Tower is a must for any Chicago tourist. At 1,353 feet, it’s the tallest building in North America! Get a bird’s eye view of the city from one of its three glass balconies. There’s no better way to start your day and set the tone for an amazing trip.

Lincoln Park is one of the most beloved parks in the city of Chicago. With over 1,200 acres of green space and countless trails for hiking and biking, Lincoln Park attracts locals and tourists alike who are looking to get outside and enjoy the beauty of nature.

The park is also home to several major attractions, including Lincoln Park Zoo, Navy Pier, and Lincoln Park Conservatory. Whether you love spending time outdoors or simply enjoy exploring new places, Lincoln Park truly has something for everyone. So the next time you’re looking for a bit of adventure in Chicago, be sure to head on over to Lincoln Park

Chicago is a beautiful city with so much to offer. The mix of cultures, food, and attractions makes it a perfect destination for any traveler. I hope this list has given you some ideas of things to do while you’re in town. So what are you waiting for? Visit Chicago today.