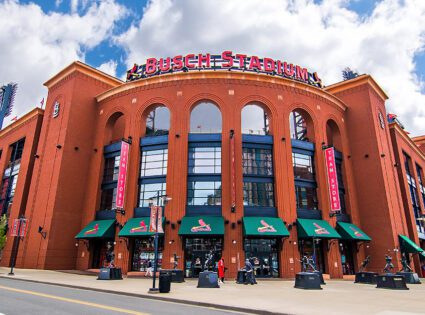 St. Louis has been called the Gateway to the West since Lewis and Clark traveled through this area on their expedition to explore new territory for the United States. Today, St. Louis still welcomes its visitors with open arms and some of the most breathtaking architecture in the Midwest, not to mention one of America’s largest urban parks—Forest Park—which encompasses 1,300 acres and boasts a zoo, museums, and more within its boundaries. If you’re planning a trip to St. Louis, be sure to include these top ten activities on your itinerary.

The Missouri Botanical Garden is an 18-acre oasis in the heart of the city that’s home to more than 15,000 plants representing 2,500 species and varieties. The garden has four distinct geographical areas: a formal European-style garden; an American wildflower area; an oriental garden with lakes and waterfalls; and the showplace atrium with giant ferns and palms.

The Saint Louis Zoo is a great place for families to come and explore the natural world through breathtaking animal exhibits and interactive displays. The zoo features more than 2,000 animals from around the world with habitats that mimic their natural homes in Africa, Asia, and South America. The park is home to some of the rarest species such as red pandas, Amur tigers, and snow leopards.

The City Museum in St. Louis is one of the most unique and fun places I have been in a long time. The entire museum is made from repurposed building materials and it has a very eclectic feel with artist studios all over the place as well as an indoor Ferris wheel, an art gallery, a movie theater and so much more!

The Cathedral Basilica of Saint Louis is the largest Catholic church in America and the seat of the Archbishop of Saint Louis. Construction began in 1868 and ended in 1914, with renovations ongoing today. The cathedral is one of only three American churches that has the title Basilica (the others are Baltimore’s Basilica of the National Shrine and Boston’s Basilica).

The Saint Louis Art Museum is one of the top five art museums in the United States. The museum has paintings by artists like Renoir and Monet as well as sculptures by Rodin and Degas. The museum also has a large and diverse collection of American artwork which includes everything from folk art to paintings from the Hudson River School era.

No American sports venue is more recognizable or has a better view than Busch Stadium. There’s nothing like walking through the gates and seeing the field stretch out before you as you walk down the steps and get your first glimpse of the unmistakable home of Cardinals baseball. No wonder it’s called America’s Most Beautiful Ballpark.

The Saint Louis Science Center is a great place for families or individuals that want to explore the world of science and how it intersects with everyday life. The Science Center houses a multitude of interactive exhibits on topics such as geology, anatomy, and more!

One of the many great things about living in St. Louis is how close you are to so much great nature and outdoor recreation! You can go kayaking or canoeing on the Meramec River or rent a boat on Lake of the Ozarks for some fishing fun. Both rivers have plenty of rapids for white water rafting as well!

Spend an evening dancing at the Fabulous Fox Theater

With live performances and a multi-tiered venue that can seat up to 3,500 people, the Fabulous Fox Theater is sure to be an unforgettable experience. The theater has hosted some of the most famous performers in history including Judy Garland, Marilyn Monroe, Frank Sinatra, and Stevie Wonder.

As the 10th largest city in the United States, St. Louis is a great place to live, work, and raise a family. There are plenty of things to do in this Midwestern gem, from watching baseball games at Busch Stadium to exploring the Missouri Botanical Garden. If you’re looking for a lively city with plenty of culture and activities, St. Louis is a perfect choice. Have you visited St. Louis? What’s your favorite thing about this Midwestern city?