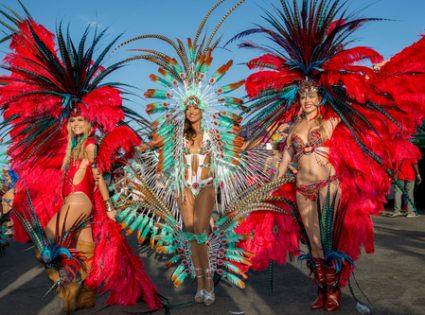 Trinidad and Tobago are two small islands at the tail of the Lesser Antilles. They are a few from a list of the Caribbean islands most frequently visited by many tourists. One of the busiest times in Trinidad & Tobago is carnival season. For the locals, preparation is way in advance. That means the party started back then.

When is Trinidad & Tobago Carnival?

Important: Due to the COVID 19 Pandemic Trinidad & Tobago carnival has been canceled for 2021.

Carnival in Trinidad starts the weekend before Ash Wednesday. The weekend starting from Friday is filled with many activities that lead up to the crowning of the Monarchs, King and Queen.

The traditional event would take place in February or March and is celebrated in the island capital, Port of Spain. It all depends on what day Ash Wednesday is observed, so each year the date changes. Nevertheless, partying and celebration are done every year. 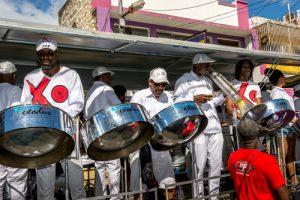 The carnival celebration in Trinidad started in honoring the Western Christian and Greek Orthodox cultures by having a festival of indulgence. It was a celebration before the beginning of Lent. However, the celebration is not religious but more of partying and having fun.

Carnival, over the years, has become a celebration of culture and music. You will hear Soca and Calypso music playing all over and see beautiful and extravagant floats in parades. One of the excitements is playing “mas.” Mas is when entertainers dress in elaborate costumes and participate in the parades. These entertainers also participate in competitions for the best costumes. At the end of the celebration, known as “Dimanche Gras,” is when you get to see the crowning of the Carnival King and Queen. 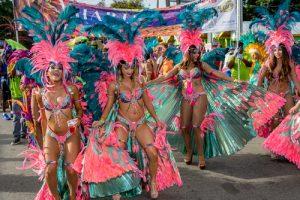 The massive and detailed costumes take plenty of time to construct. So, preparation starts many months in advance. Once the time has arrived, the celebration is in full swing. The official festivities begin on Saturday with the National Panorama competition. The competition includes Single Pan Band to Conventional Steel Band competing for the title in each category.

On Sunday, the Dimanche Gras competition is held. Calypso and Soca Bands compete for the best over-the-top costumes to be named the Calypso Monarch. Judges and the spectators select the King and Queen among the bands. After, the party continues through the night.

Just before dawn on Monday morning, the masquerade party begins, “J’ouvert” or “Dirty Mas.” At the party, costumes demonstrating current events are displayed by participants. A King and Queen of J’ouvert are chosen after being judged. After J’ouvert, there is a parade with mas bands that goes on throughout the day. In the evening, there is another competition for the best Carnival performer.

Tuesday is the final day of the festival, and it is the biggest. There are group bands that usually dress in a themed costume. They all parade through the streets that lead to Queen’s Park Savannah. Once there, each team is judged for the best mas band costume and individual street parade costume. Also, the Road March King and Queen are crowned for the singer with the most played song. The festivities continue up to midnight. That is when Carnival is over until preparations start all over for the next year.

So, if you are ready for some fun in the sun, Trinidad & Tobago is the place to go. Especially during the carnival season when you get to experience the island’s culture, tradition, people, food, and fun times.