What To Do When You Catch a Stomach Bug While Traveling 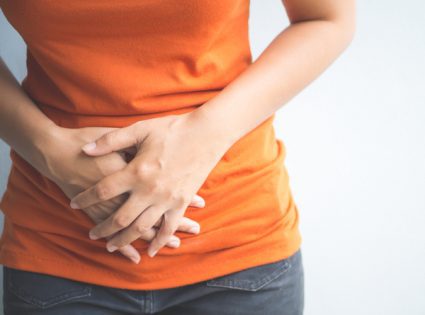 When traveling to developing countries, you’re bound to experience stomach illness unless you’re impossibly strict with hygiene.
Even then, food poisoning and airborne viruses can circumvent your best-laid plans.
It’s really quite terrifying. Really, what do you do when you catch a stomach bug while traveling?

Rather than harp on about hygiene, I want to research and discuss treatment.
After all, none of this really matters until you’re on your knees whispering not-so-sweet nothings to the nearest porcelain bowl.

The Price of Admission

Over the past year on the road, we’ve had our fair share of a stomach illness. In Peru, I ended up in a makeshift hospital on an IV drip. In Argentina, my friend spent a month submitting tests to a specialist clinic. And in India, oh India; no nasty hospital visits, but plenty of delirium and dehydration.

But don’t let stomach illness scare you off adventure travel. Although it’s the price of admission, you can certainly lessen its impact. And it’s not really that bad; it’s just inconvenient.

It’s important to find a balance between safety and experience. At one extreme, you can walk around with pockets full of hand sanitizer and never eat a lettuce leaf cleaned in tap water.
At the other extreme, you can eat anything and everything without thinking twice or ever washing your hands.

Somewhere in the middle is best. Take precautions, but don’t drive yourself nuts in the process. In fact, being too cautious is detrimental to health, which I’ll explain later.

Travel-related stomach illness is generally caused by viruses, bacteria or parasites. The distinction is important because they require entirely different treatments.

Viruses can’t live for long without a host. They attach to us and invade our cells. This is why many medicines, such as antibiotics, don’t work on viruses.
Medicine flows through our bloodstream, but rarely enters our cells, where viruses live.

We contract viruses from people and animals. Sometimes food is the transport mechanism, but since viruses can’t live long without a host, that’s not as common.

Bacteria are much larger than viruses and can live alone without a host. Instead of invading your cells, they themselves are a single cell. Most bacteria are good for us, some vital. But others create problems and produce toxins.

Parasites are less common, but they tend to be a pain to get rid of. They’re bigger than viruses and bacteria because they’re micro-organisms. Think worms and little bugs, but also single-celled protozoa.

We often contract parasites from fecal matter or food. They’re prolific little buggers and lay millions of eggs all over the place. Children are especially at risk since they’re more likely to play outdoors and come into contact with fecal matter in soil and water.

With the advent of online medical dictionaries, we’ve all become self-certified medical practitioners. And because we’re mostly treating ourselves, we love to match the most common symptoms with the most life-threatening diseases. They say you can never be too careful, but that’s not entirely true when it comes to treating illness.

A result of over-analyzing is over-medicating. This makes diseases stronger and more resistant to our medications. And as we have to deal with more resistant strains, we often have to use more powerful drugs. The common staph bacteria has already morphed into a highly-resistant, deadly strain (called MRSA) that plagues hospitals all over the world.

Unfortunately, most of the world’s antibiotics go into farm feed. Since farming is a business, farmers medicate animals on a daily basis to keep them healthy and valuable. But such profligate medicating does more harm to humans than good. We really need to be more selective with how we use antibiotics, on both global and personal scales.

Differentiating Between Viruses, Bacteria, and Parasites

From my research and personal experience:

With this in mind, it’s best to wait out the 24 hours and hope your illness disappears. Especially if symptoms such as vomiting come on aggressively.

Should You Visit a Hospital?

If the initial symptoms include severe delirium or a dark bloody stool, it’s wise to head to the hospital immediately. Otherwise, tough it out for a day if it feels right. During the first day, nurture your immune system with rest, lots of water and bland food. Your immune system should beat most bacterial and viral infections by itself without medicine.

If symptoms get much worse after a day, go to a hospital.

If early symptoms are mild but get increasingly worse, you may be looking at something more tedious, like Giardia, which is a parasite. This may not be as serious in the early days, but you’ll need clinical tests and specific medication (not just broad-spectrum antibiotics) to eradicate the infection.

If you still have moderately serious symptoms after a few days, get to a hospital too.

If symptoms taper off quickly but then drag out for a few days, you may consider self-medicating with antibiotics if you can’t reach a doctor. But you must take a full course, otherwise, you’re doing yourself a grave disservice.

Why Take the Full Course of Antibiotics?

Imagine fighting in a war; it’s survival of the fittest. Your weakest adversaries will be killed first. So if you only commit to half a battle, you’ll get rid of the weak and leave the other side with leaner and stronger fighters. They’ll, in turn, reproduce and build even more genetically advanced fighters. It’s the same in the war against bacterial infection.

We can protect ourselves against some viruses with vaccines. Vaccines help us build antibodies, which attack viruses before they become unruly. But many potentially fatal viruses, such as Dengue Fever and HIV, don’t have vaccines.

Vaccines often last a long time, so it makes sense to get vaccinated to prevent some of the really nasty (and common) viruses. Rather than spending a small fortune at home, I suggest getting vaccinated in a developing country. You can get an entire battery of vaccines for less than $30, whereas it could cost upwards of $500 at home. Additionally, developing countries know about these diseases; they see cases on a daily basis.

Listen to Your Body

If something feels wrong, especially in your head, just go to the hospital. If you’re really sick and throwing up, but you just feel sick, try to tough it out in bed. If you want to medicate, take painkillers, but make sure you know when to take them. A sensitive stomach will get worse with the wrong painkillers, so research helps.

Give your body a day or so to do its thing. If after a day you get much worse, bring in the big guns (medicine). Or if moderate symptoms persist after a few days, get tests done. You’re on holiday and you’ll want to feel better as soon as possible, but a lot of stomach illness is caused by over-medicating. Antibiotics and painkillers cause just as many stomach problems; many longer-term cases are medically related.

You’re not going to feel fit and healthy and virile if you eat crap all day. Food is just food. It’s meant to give us energy and nutrition. That’s it. Eat some veg, eat some whole grains, and find a more interesting pastime. It’ll do wonders for your digestive tract and holiday happiness. 🙂