10 Exciting Things to Do in Times Square (New York) 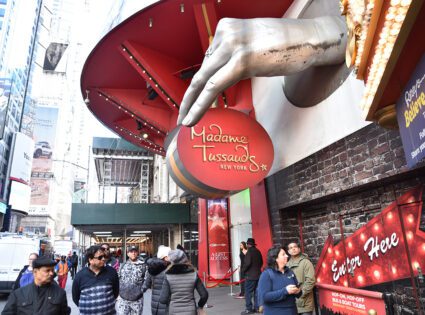 Time Square is one of the most exciting, colorful, and sometimes overwhelming tourist destinations in the world, and if you’re traveling to New York City, it’s a must-see attraction. Here are 10 things to do in Times Square that you should definitely add to your itinerary during your trip!

Times Square is one of the most recognizable places in the world, and its name is just as iconic as its location. But why is it called Times Square? The answer actually dates back to the late 19th century, when the area was first developed. At that time, the New York Times newspaper was one of the most influential publications in the city, and it decided to build its new headquarters in the area now known as Times Square.

The newspaper’s building was inaugurated in 1904, and soon other businesses began to set up shop nearby, drawn by the paper’s popularity. As a result, the area became known as Times Square. Over a hundred years later, it is still one of the most vibrant places in New York City, and its name is a reminder of its unique history.

Get a picture with The Naked Cowboy

The Naked Cowboy is a true New York City icon. He’s been serenading tourists and locals alike in Times Square for years, and there’s no better way to capture the essence of the city than by getting your picture taken with him.

You can find him serenading tourists all day long and easily get a picture with him by saying something to catch his attention. The only problem is that once you get your picture taken with him he’ll likely ask for a donation!

Bubba Gump Shrimp Co. is a great place to eat in Time Square. The food is fresh and delicious, and the staff is friendly and helpful. Plus, the restaurant has a great view of the city.

The original Bubba Gump restaurant opened in 1996 and is based on a character in Forest Gump. The Shrimp Co. location has a similar theme and you can also find many of Forest Gump’s scenes here.

Check out the interactive trading floor at the NYSE Euronext

Even if you don’t have an interest in investing, it’s still fun to watch the traders do their thing. Since its founding in 1817, over 180 million shares have been traded on the NYSE Euronext with a total value of more than $6 trillion! How cool is that?

Seeing a Broadway show is a must-do while in New York City. There’s nothing like experiencing the energy and excitement of a live performance. Plus, there are so many great shows to choose from. Whether you’re looking for a musical, a comedy, or a drama, there’s sure to be a show that’s perfect for you.

You’ll want to get tickets well in advance of your trip, as they can often sell out. You can search for Broadway shows online, or visit a store such as TKTS at Times Square. If you plan on seeing more than one show, it might be worth investing in a tourist package that includes discounted tickets to several Broadway shows. Alternatively, you could try and see as many shows as possible during a single visit to New York City – but that can get expensive!

Try an ice cream cone from The Original Rainbow Cone

The ice cream at The Original Rainbow Cone is some of the best in New York. They have a wide variety of flavors and their cones are always fresh and crispy. Plus, the line is never too long so you won’t have to wait forever to get your hands on one of these delicious treats.

Watch the water shows at Zumanity by Cirque du Soleil

Zumanity by Cirque du Soleil is one of the most popular water shows in Times Square. The show is a performance that features acrobatics, dance, and comedy. Zumanity has been running for over 10 years and continues to be one of the most popular tourist attractions in Times Square. If you’re looking for an exciting and unique way to spend your time in New York, be sure to check out Zumanity by Cirque du Soleil!

Climb to the top of One World Trade Center Observation Deck

For the best views of New York City, head to the One World Trade Center Observation Deck. The deck is 1,250 feet above street level and offers 360-degree views of the city. On a clear day, you can see up to 50 miles away. To get to the top, take the elevator to the 102nd floor and then climb another set of stairs to the deck.

Ride on the Wheel at Empire State Building

Experience a musical at Minskoff Theatre

There’s nothing quite like experiencing a Broadway musical in the city that never sleeps. Minskoff Theatre is one of the most popular places to see a show in Times Square, and with good reason. The theatre has been home to some of the most iconic musicals of all time, including The Lion King, Aladdin, and Mary Poppins. If you’re looking for an unforgettable experience while in New York, be sure to catch a show at Minskoff Theatre.

Take photos with the famous I Love NY sign

One of the most popular things to do in Time Square is to take photos with the iconic I Love NY sign. This sign is a symbol of New York City, and it’s a great way to show your love for the city. Plus, it makes for a great photo op!

Hop On Hop Of Bus

This is a great way to see all of the sights and attractions that the area has to offer. Plus, you can hop on and off at any time, so it’s easy to explore at your own pace.

You can get a full pass to see all of the attractions, or you can purchase individual tickets at each stop. Make sure to check prices when you get on so you know how much time to budget for each stop. You don’t want to run out of time before you reach your next destination.

Some stops have different entrance fees from others, so make sure that when you’re planning your itinerary, you pay attention not only to which attractions are included in your ticket but also to which have additional fees.

One of the most popular activities in Time Square is people watching. You can find all sorts of characters here, from street performers to tourists to locals. There’s always something going on, so it’s the perfect place to people watch.

Time Square is home to the world-famous Madame Tussauds. This attraction lets you get up close and personal with your favorite celebrities. You can take photos with them, and even get autographs! Madame Tussauds is a must-see for any fan of celebrities.

In conclusion, there are plenty of exciting things to do in Time Square, whether you’re a first-time visitor or a seasoned New Yorker. From watching a Broadway show to taking in the city views from the top of the Empire State Building, there’s something for everyone in this bustling area of NYC.